This week, Mitsubishi Motors South Africa introduced a striking new compact SUV to our local market. The all-new Eclipse Cross has launched with distinctive concept-like styling, a host of specifications and features, and after driving it at its launch we’re impressed with what it has to offer on (and off) road.

On the morning of its local launch in Cape Town (25 February 2019), new Eclipse Cross vehicles congregated outside the Iziko Museum and Planetarium (a fitting location) to introduce the newcomer. First impressions as I headed towards the display were that of excitement and anticipation of our day ahead with the new Eclipse Cross. It really is a good-looking car, with its futuristic design elements that certainly stand out in a crowded segment. Speaking of its segment, the Eclipse Cross competes with big names such as the KIA Sportage, the Toyota CH-R and the Mazda CX-5, to name a mere few. In Mitsubishi’s SUV range, it slots in right between the ASX and the Outlander.

The new Eclipse Cross has won a host of international awards, including the prestigious ‘Good Design’ award for Design Excellence and Innovation, and you can see why. Its wedge-shaped, coupe-like design, and sharp angular lines stimulate its futuristic appearance – there’s a lot to take in when walking around it to get familiar with its dynamic styling. Some of its exterior features include 18″ alloy wheels, Projector Halogen Headlights, Daytime Running Lights, chrome detailing and a silver front bumper skid plate. Mitsubishi has added a read spoiler that incorporates a high mounted stop-lamp and gives it added sportiness. 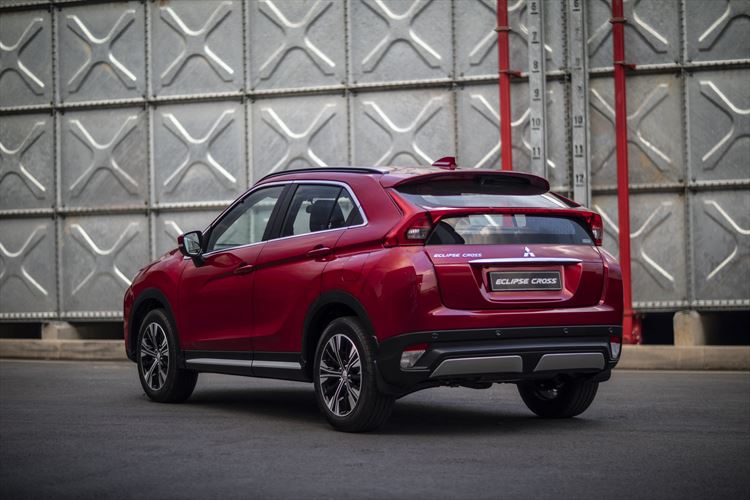 While some may find its cabin slightly underwhelming (in comparison to its exterior), I like that Mitsubishi has given the Eclipse Cross an uncomplicated, but sleek and sophisticated interior. Everything is neatly laid out and complemented by super comfy soft-touch surfaces and comfortable bolstered seating. There are loads of padded areas that your elbows and arms come into contact with – and storage compartments for water bottles, phones, keys and sunglasses are plentiful.

The cabin of the Eclipse Cross also gets a Heads Up Display so the driver spends less time with his/her eyes off the road. The HUD shows information in full colour and its display height and image brightness can be adjusted to suit your preferences. The screen extends and retracts when the ignition if turned on or off.

In terms of luggage and boot space capacity – which is almost always a concern when browsing in this segment, the new Eclipse Cross might not be the best in its class, offering 341-litres to 448-litres of boot space, (depending on whether its rear seats are folded flat or not), but it’s still competitive. Mitsubishi’s, Pedro Pereira, pointed out that the Eclipse Cross is more specifically catered towards drivers who spend the majority of their time in and around the city and suburbs, and less time driving to holiday destinations or long distance. 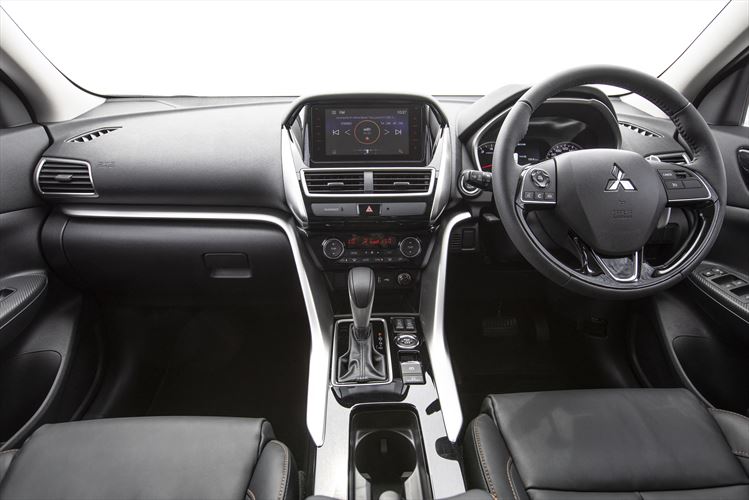 The new Mitsubishi Eclipse Cross launches with two derivatives for our local market: a two-wheel drive version for regular everyday driving, and an all-wheel drive version for those who like to venture off the beaten track. We drove both at the launch and although the AWD version offers more off road stability and control, the two-wheel drive version was impressive on the gravel too! In the AWD version, the driver can choose between AUTO, SNOW or GRAVEL, depending on your terrain and driving conditions. Suspension on the Eclipse Cross (for both versions) really is impressive – my co-driver and myself couldn’t believe how effortlessly it absorbed even the largest of bumps and uneven surfaces when we ventured off road (even in the 2WD model).

Both versions are powered by a 2.0-litre petrol engine that offers 110kW of power and 198 Nm of torque. This is mated to a 6-step Sports CVT gearbox, which we’re not always a fan of, but were particularly impressed by in the new Eclipse Cross. It doesn’t strain or obstruct the quietness of the cabin, and it seems to easily and quickly find gears in most driving conditions. Mitsubishi claims that its CVT gearbox with Sports Mode contributes a fuel consumption of 7.9-litres and 8.1-litres on the 4×2 and AWD derivatives respectively.

I’m excited to see how compact SUV fans and buyers take to the new Mitsubishi Eclipse. It really is one of the most updated-looking SUVs in its segment and has an impressive list of standard spec for its price tag. The Eclipse Cross is well suited to the trendy, confident go-getters looking for a value-for-money product that caters to their active, busy lifestyles.

Both models are covered by Mitsubishi’s Manufacturer’s Warranty of 3 years or 100 000km, a 5-year / 90 000 km Service Plan and a
5-year / unlimited mileage Roadside Assistance.