The new Suzuki Jimny arrived in South Africa towards the end of 2018, and to say that it had plenty of Jimny fans eager to get their hands on one is an understatement. In fact, at the time of its launch the new Jimny was already sold out and there’s currently a bit of a waiting period for those placing orders.

Over the December holidays, I reunited with the new Jimny for a solo road trip down Kwazulu Natal’s South Coast, where I really got a taste of what new owners will be getting from this quirky, fun and extremely capable little off-roader…

Hopping in at King Shaka International Airport to set off on a week-long trip, the level of excitement associated with the new Jimny was a great way to start the holiday. It’s retro and unpretentious styling is a great indication of the amount of fun you can have. It doesn’t matter who you are, you feel instantly cool in the driver’s seat and there’s a sense of freedom that comes with knowing you can push it a bit further than you would with other more delicate off-roaders.

My ‘Jungle Green’ test unit was perfectly suited to the destination I was heading to – a farm location called Bushy Vales, situated almost 300 kms down KZN’s South Coast among dense and lush, jungle-like greenery. Parts of the Bushy Vales’ ‘jungle’ has set the scene for many iconic movies, such as Warner Bros’ new Mowgli blockbuster.

I love that the new Jimny boasts sharper, more defined exterior edges to enhance its increased dimensions. To me, the new jimny looks like the male version of its predecessor, with a more daring, rugged and ‘outdoorsy’ look that really dares you to put it to the test. New to off roading? The new Jimny makes venturing off the beaten track a breeze, and I was lucky to have experienced it on gravel, through thick vegetation, as well as through some super tricky obstacles made easy with the Jimny.

The idea of me driving alone down KZN’s South Coast had my family in all sorts of panic. “Those people will pull your teeth out for nothing,” were some of the dramatics thrown at me in an attempt to get me to consider alternative options. Nevertheless, I felt nothing but confidence and enjoyment during my solo drive to the farm. A high ride height, easy-to-get-used-to driving dynamics and my favourite music connected via the Jimny’s Bluetooth without any fuss, accredited a memorable, safe and fun 2.5-hour road trip.

I drove the range-topping GLX model, which comes with a host of additional features as standard, from automatic climate control, alloy wheels, colour coded door handles and painted exterior mirrors, as well as a leather covered steering wheel with hands-free phone, audio and Bluetooth controls, to name just a few. If you want to know what the Jimny’s entry-level GA model offers, here you go… 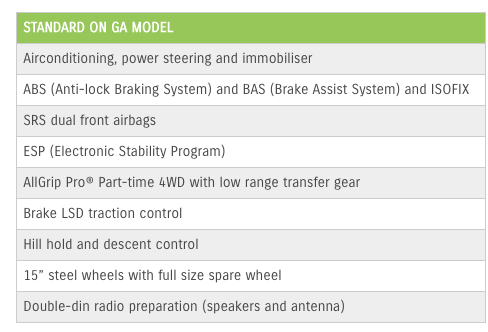 The new Jimny has been replaced with a 1.5-litre petrol engine (previously a 1.3-litre) and offers 75kW of power and 130 Nm of torque, and my test unit was mated to a five-speed manual gearbox. There is a 4-speed automatic transmission available, if you prefer a more relaxed two-peddle option. I found the manual version far more enjoyable, punchier and more responsive, particularly noticeable on the highway where the manual version does a much better job at overtaking slow moving vehicles or when powering uphill while the vehicle is loaded with suitcases and Christmas presents!

Let’s talk about space. If you’re a large family, the Jimny probably isn’t your car and I’d suggest looking at the rest of Suzuki’s range for something more accommodating. The boot (with the rear seats up) only offers 85-litres of space. This can be increased to 377-litres if you fold the rear seats down, but then you’d need to leave the kids at home. To me, the Jimny is perfectly suited to young couples, or those like myself who enjoy regular adventures and road trips, either solo or with a friend or two. With the rear seats folded flat, I loved that I could easily load and offload large items and without worrying about damaging anything. This little car’s interior is as tough as its off road system.

As I was going to be doing a lot of off roading during my trip, I needed to get permission from Suzuki as to whether or not I could take it through some tough terrains and environments. “I promise I won’t break it!” I said. I was very quickly reminded that the Jimny is virtually impossible to break, and once I had the go-ahead, the Jimny, my dad and I joined some of the locals on the farm (and their Toyota Hilux’s) for some proper jungle driving. The drivers of the big bakkies didn’t seem to have much doubt that the little Jimny would be able to keep up with them, as they charged through the farm, up and down steep and slippery hills, big rocky terrains and various rivers. Threading through the convoy with the Jimny put quite a smile on my face, I can’t think of many other off-roaders that can maneuver as easily, quickly and with so much agility and it meant that I got to enjoy exploring a few places that not many get to experience… 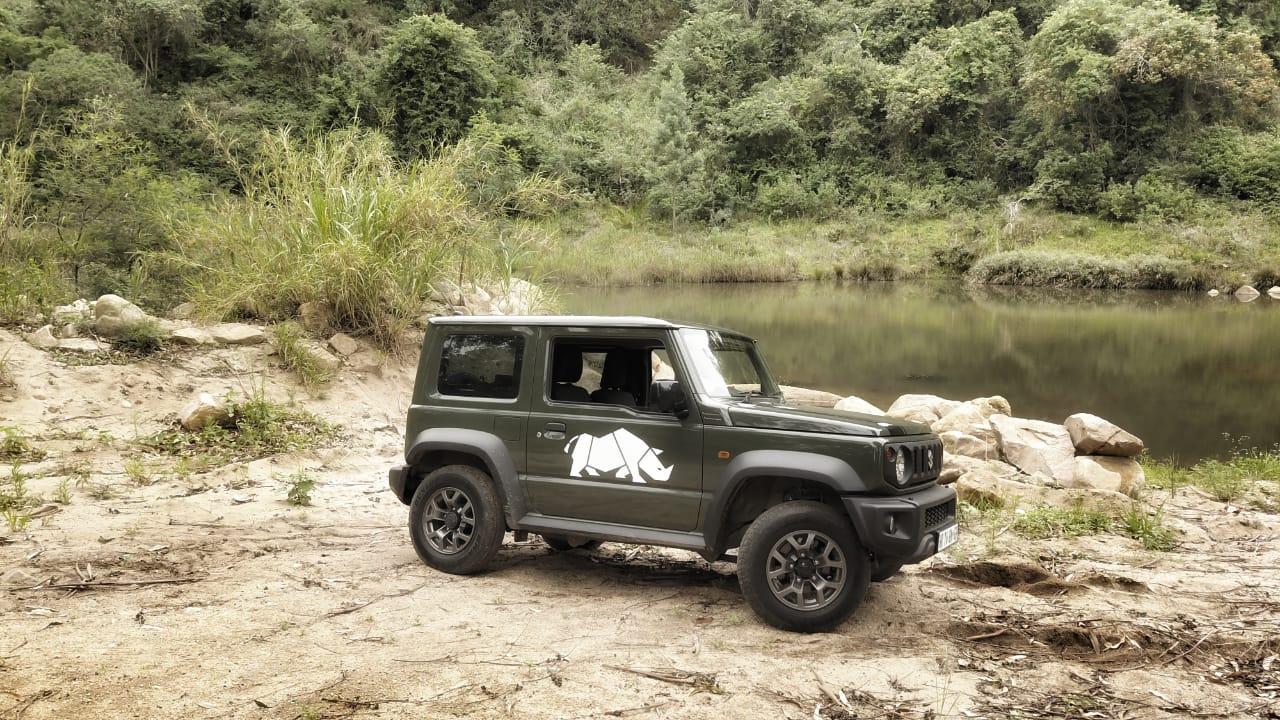 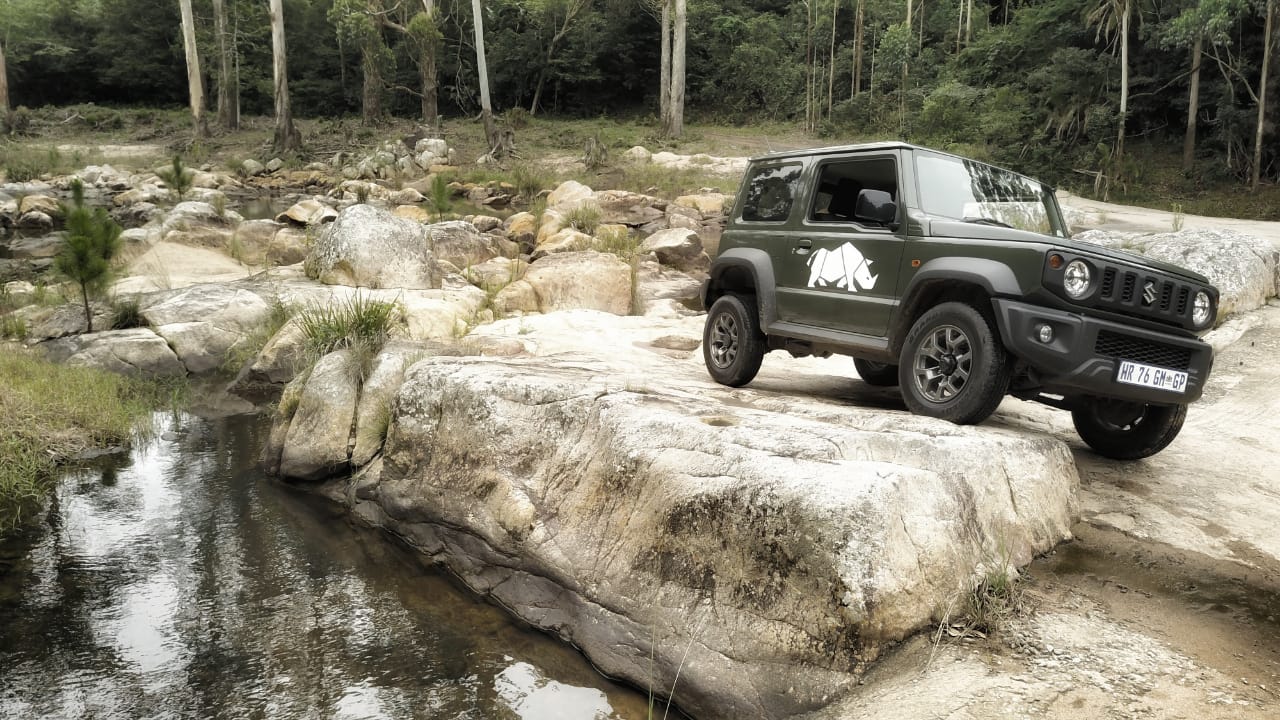 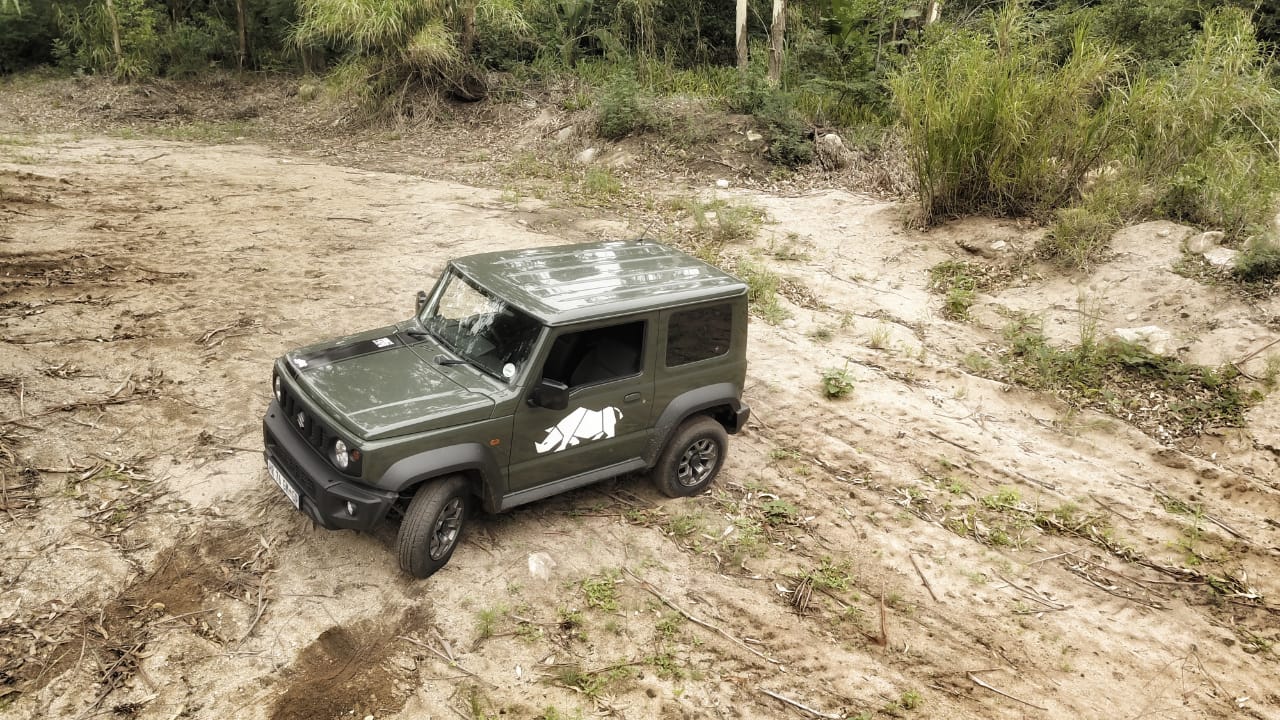 We know now that it can go almost anywhere, but what is it that makes the Jimny such a capable little off-roader?

As before, the new Jimny is specifically built as a 4×4, using strong materials under the body that allow for proper off-roading. Its 4×4 system also allows drivers to easily switch between 4×2, 4×4 high and 4×4 low range, with a secondary gear lever. It can easily adapt to different terrains, thanks to clever systems that assist even the trickiest of obstacles. The integrated Hill Hold Function and Hill Descent Control enhances its braking system; you simply lift your foot off the brake on an incline, and the car will remain stationary for up to three seconds. On declines, the Jimny does all the braking for you as you make your way down. We tried this on a number of hills and it really is just such a clever little car – and the addition of its AllGrip Pro system keeps you steady and controlled.

Back in town, the new Jimny got all the attention it deserves from various onlookers. It was rare that we could park in a parking lot and not hear someone say “look it’s the new Jimny!” or ask if they could have a look inside. It makes you realise just how popular this car is and it certainly gets you a lot of likes and engagement on social media. There’s nothing uncool about this car – unless you live in a bubble.

After seven fun-filled and adventurous days with the new Jimny, I’d grown even more attached to it than I had at its launch. It really suits my lifestyle, as a single person who enjoys long road trips and exploring new outdoor places with friends and family, and the fact that I got to see some special, hidden, locations was really thanks to its capabilities.

Tiny but tough, the new Jimny is a worthy consideration for those looking for their next adventure vehicle!

Off roading down KZN South Coast with the @suzuki_za Jimny. So much fun to be had with this car! #newJimny #SuzukiJimny #newjimny2018