This week in the Elon Musk Show, Musk steps in to personally oversee Tesla Model 3 production. Special appearances by Grindr and Google Maps…

This week in tech news, Facebook isn’t the only one sharing all of your information. Also, Elon Musk has had enough of Tesla’s shortcomings and has stepped in to take the reins himself. Whether or not this bodes well for Tesla remains to be seen. If anybody can turn the situation around, it’s Musk.

And finally, Google Maps begins to roll out a Wheelchair Accessible function to make lives easier.

Hot on the heels of the latest Facebook fiasco. It emerged last week that Grindr has been sharing data on whether or not its users have HIV. This is according to Buzzfeed and Norwegian research non-profit SINTEF.

The data was allegedly given to two companies, Apptimize and Localytics, which help optimise apps.

Grindr users, numbering in about 3.6 million, are predominantly gay, bisexual, trans and queer. Users indicate on their profile what their HIV status is, positive or negative, when they were last tested and whether or not they’re currently taking any HIV treatment.

Grindr has been sharing this information with the two companies, making it easier to link specific users with their health conditions. The app has gone even further. According to SINTEF, Grindr has also been sharing user info such as GPS location, sexuality, relationship status and contact details with advertising companies.

In some cases, this data wasn’t even encrypted, and could potentially put the privacy of users at risk.

Mere hours after the Buzzfeed report, Grindr’s security chief, Bryce Case, told Axios that he felt Grindr was being unfairly singled out in light of the Facebook Cambridge Analytica scandal. Case said that Grindr’s practices didn’t deviate from the industry norm.

Apparently, it is standard practice for mobile apps to work with companies such as these, under strict contractual terms. Technology officer, Scott Chen, pointed out that Grindr does not sell the user info to third parties.

Perhaps the app should have been clearer on how it uses the data given to them, though. As of 2 April, Grindr announced that it has stopped sharing HIV data.

It could be seen as a nasty sign; the CEO himself coming in to take control of a situation gone awry. As Elon Musk himself has stated though, it is his job as CEO to focus on what is most critical. Right now, that’s Model 3 production.

Musk confirmed on Twitter that he is back to sleeping in the Tesla factory. Last week, he announced that he has taken direct control of the division responsible for producing Tesla’s Model 3 electric sedan.

The company has reportedly failed to meet the delivery goals set, intending to produce 2500 Model 3’s per week by the end of last month. Tesla has only been hitting around the 2000 mark.

This isn’t the only Tesla news we’ve had lately. 123 000 Model S vehicles have been voluntarily recalled due to problems found with the power-steer component of some vehicles. The US National Highway Traffic Safety Administration also launched an investigation into Tesla’s autopilot involvement in a fatal crash.

In March, Tesla experienced its worst month in seven years. Not one to be easily dissuaded, Musk took to Twitter again with a number of April Fools tweets declaring Tesla bankrupt. 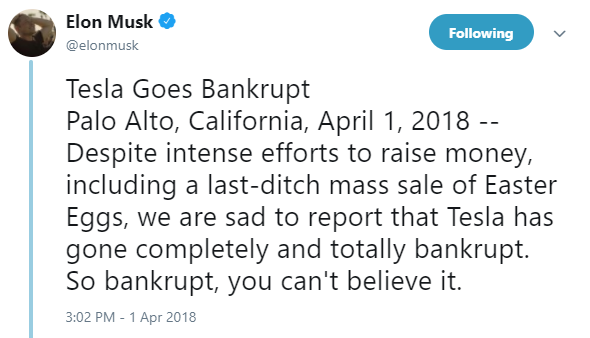 A later photo was captioned:

“Elon was found passed out against a Tesla Model 3, surrounded by “Teslaquilla” bottles, the tracks of dried tears still visible on his cheeks.” Google Maps is improving by the minute. Now, it has expanded even further with a new, much-needed feature. Wheelchair accessible routes.

With all the stairs and escalators found at bus stations, train stations and airports, the new feature is specifically designed to help wheelchair users navigate public transit routes. Most of these places are a complete nightmare to navigate for people who are able to walk around. Doing it in a wheelchair must be nothing short of aggravating.

“But many of these places already have ramps,” I hear you say. In my mind, by the way, your voice is high-pitched and nasally.

The ability to map out a concise route before even leaving home will make the lives of wheelchair users a lot easier. Users will be able to find wheelchair accessible routes by putting their destination into Google Maps, selecting Options and then hitting the WheelchairAccessible Toggle. 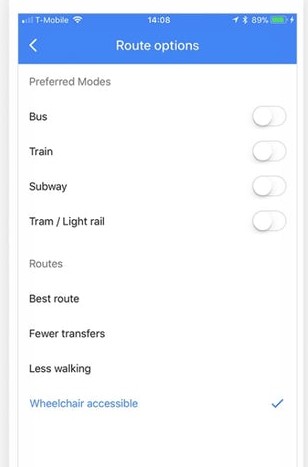 Google Maps then provides routes which take users through the transit areas that are most equipped for their needs.  The feature isn’t limited to wheelchair users, though. Old people may find it useful, or those with an injury who use crutches. Even mothers with baby strollers.

The feature isn’t available in South Africa yet. So far, it has been rolled out in London, New York, Mexico City, Tokyo, Sidney and Boston.