Small luxury SUVs are becoming more and more desirable these days, with the likes of the Jaguar E-Pace, Volvo XC40, Audi Q3 and now the Lexus UX 200 in this segment. Exciting styling, innovative technologies and new safety systems are at the forefront of what customers can expect and in Lexus’s smallest baby SUV you’ll find just that and more.

If you’re looking for the most affordable Lexus SUV you can buy, the UX 200 is it. I’ve just spent a week getting cosy with its F Sport derivative, so here’s what you might want to know…

The Lexus UX200 F Sport is a great, urban-looking, compact crossover that shows off its style with its sharp and angular design work, while adding sporty touches to indicate its sports-car intentions. Lexus calls the UX200 a ‘creative urban explorer’ and while that pretty much sums its up, it also has quite a futuristic, concept-like appeal to it. Arguably, most favoured is the design of the UX 200’s rear end with its continuous LED taillight that swoops across the entire back end. 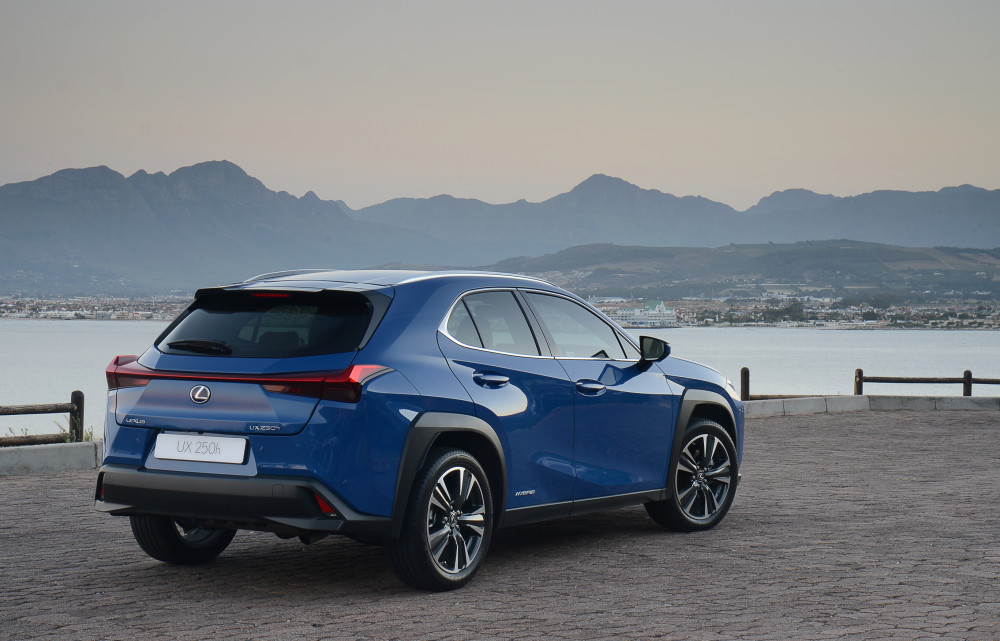 The UX name is derived from the design team’s guiding concept and describes the vehicle’s mission: Urban + X-over (crossover) = UX. What I love about the UX 200 F Sport is that although this particular model adds a more athletic exterior, it’s not overly masculine.

The 2019 Lexus UX is offered in a palette of 13 exterior colours to accentuate its stunning lines. Two of those colours, White Nova and Heat Blue, are exclusive to the F Sport.

Considering that this is the cheapest and smallest SUV in the Lexus range, there’s a lot in the cabin that impresses and the F Sport derivative offers a sporty but luxurious environment. Apart from its sophisticated styling, you get super comfy seating, high quality finishes and padding all around, and loads of functionality to keep you connected and entertained on the road.

Lexus UX Chief Engineer Kako, Executive Vice President of Lexus International, drew on her extensive experience in materials development and time spent working in Europe to help define the UX interior’s appearance and quality. The result is an uncluttered “less is more” approach that makes the UX feel more inviting and accessible.

“When it comes to determining whether an interior is good or bad, controlling the overall balance between the continuity, unity and contrast is more important than the relative specifications of individual components,” she said. 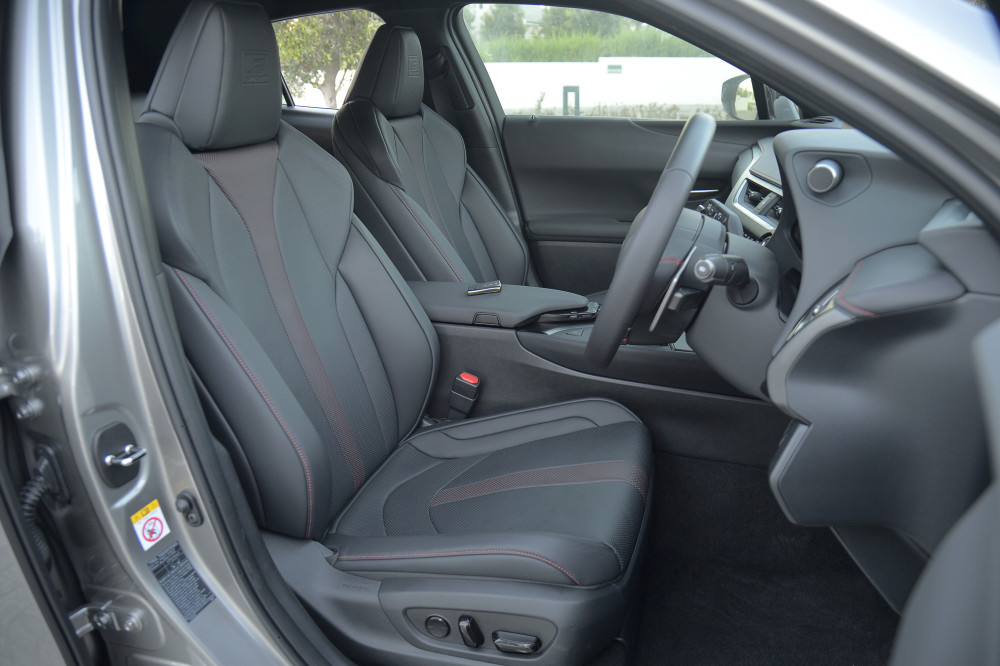 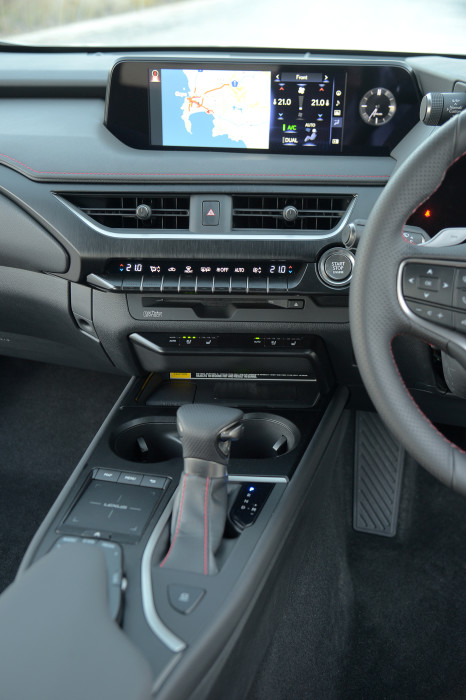 The 10.25-inch infotainment system (on the F Sport) is operated via a track/mouse pad that offers HAPTIC feedback and is located on the centre console, however it does take some getting used to if you haven’t used one before. I always prefer a simple touchscreen, but then you’d have to settle for fingerprints. Apart from that, the screen resolution is clear and of high quality.

For the music lovers, standard on the F Sport is the Mark Levinson Premium Surround Sound System — a segment exclusive — which has a 13-speaker array, low-distortion 668W Class D 8‑channel amplifier, Quantum Logic Surround Sound and ClariFi™ 2.0 technology to deliver an immersive concert-like sound experience in the UX.

While there’s just enough space and comfort in this little crossover to keep friends and family happy on the road, boot space in the UX 200 isn’t as generous, and offers the same sort of capacity as a hatchback. However, it’s important to remember that this crossover is specifically built for the city and for those looking for the most affordable Lexus in the SUV range, so all things considered, its boot space isn’t too bad after all.

As for safety, you get everything you’d expect from the Lexus brand and on the F Sport and Hybrid models you get the full Lexus safety suite as standard.

The Lexus Safety System comes standard in the F Sport and Hybrid models and includes:

A compact crossover that offers efficiency and a zippy pace and performance is exactly what one needs in our busy South African cities. These are the benefits of having a small SUV, because while you have a high ride height that gives you a sense of confidence and command of the road, you’re not compromised when it comes to being nimble in tricky parking spots and congested roads. The UX 200’s F Sport derivative adds even more assertiveness behind the wheel, with a selection of Drive Modes that includes an S Sport+ Mode – this dramatically changes the handling dynamics. If you want to save fuel and do your bit for the environment, ECO mode smooths the throttle response, and moderates air conditioning operation.

An electric power steering system makes steering responsive and easy to manage, particularly in the city. The Lexus UX petrol models deliver 126kW of power at 6600rpm and 205Nm of torque at 4800rpm, equating to a 0-100km/h sprint time of 9.2 seconds, topped off by a maximum speed of 190 km/h. It produces fuel economy figures of an acclaimed 6.1-litres/100km combined; and CO2 emissions are pegged at 142g/km. As for its transmission – the new Direct Shift-Continuously Variable Transmission (D‑CVT) combines a smooth, fuel-efficient performance of a continuously variable transmission with a more direct driving feel. While many people still seem put off by the thought of CVT gearboxes (and I don’t blame them, because there are loads of CVT gearboxes out there that really undermine and sometimes even ruin a car’s performance), some manufacturers are getting it right. Lexus is one such brand that has managed to utilise performance by way of a mechanical gear set that is used to start from a stand-still and accelerate before it switches to the continuously variable transmission system. This means that first gear will always feel as good as a normal automatic transmission, and you only really notice the CVT gearbox once you’re up and running on the road.

The Lexus UX 200 is a fantastic little crossover for entry-level buyers in the premium segment, or perhaps for those looking to buy down from their large SUVs to something smaller and more economical. Its striking design is trendy, while there’s loads on offer as standard, and if you’re looking for a small crossover that’s focused on urban commuting (as opposed to trips that require large amounts of boot space or extra seating), the UX 200 is certainly worth a test drive. If you want added sportiness (by way of design and driving) then the F Sport gives a good amount of enhancements for this model.

A classy little crossover to say the least. Nimble on the road, sporty behind the wheel and comfy in the cabin, the @lexus_sa UX200 F Sport is admirable! #lexusux200 #fsport #ux200 #womenonwheels