Which Is The Busiest Petrol Station In SA?

Which is the most popular / busiest petrol station in South Africa? Tracker and Lightstone put their resources together to answer…

Which is the most popular petrol station brand in South Africa? And where can we find the busiest petrol station? Lightstone Explore, a provider of geospacial analytics, and Tracker came together to answer that for us.

In order to determine which is the most popular service station on our main national routes, data was compiled by analysing the driving behaviour of 150 000 South African commuters fitted with telemetry devices. This analysis took place over the month of December 2017 – the holiday period.

Before we get to the petrol stations, here are some other discoveries of interest:

Not surprisingly, the data showed that 36% of vehicles generally found in less affluent areas went away on holiday, compared to a greater 60% of those in wealthier areas.

The most visited province by car was KwaZulu-Natal, followed by Limpopo, the Eastern Cape and then the Western Cape. The least popular, probably because it’s just too hot and boring to survive, was the Free State and the Northern Cape.

Coastal residents were less likely to travel. Residents of Gauteng, the Free State and the Eastern Cape couldn’t wait to leave, though.

Because of this, the busiest petrol stations can be found along the main routes toward the coast.

Engen was by far the busiest service station, accounting for 37% of overall visits. Second was Shell with 30%. Of course, these giants have a large presence along the most popular routes and these numbers reflect that.

Sasol, touted as the most popular day-to-day petrol station last year, had only 8% of the overall visits. Sasol garages aren’t too common along the main routes, but you’re more likely to find one just down the road from your home. 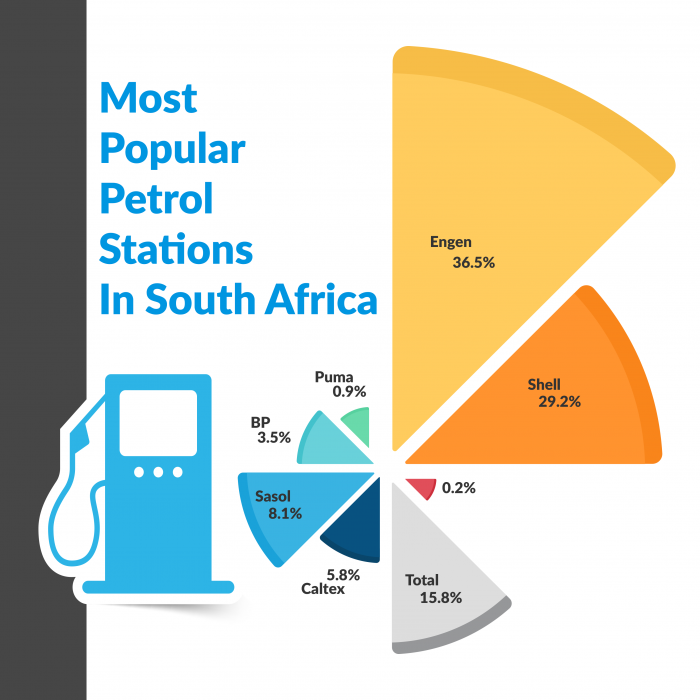 In order to reduce fatalities, drivers have been implored by government road safety initiatives to make frequent stops along lengthy journeys. This is an effort to reduce road fatalities caused by people falling asleep behind the wheel.

Taking data from the N3 highway toward KZN alone, the following could be found:

The Busiest Petrol Station Of Them All

The joint venture between Lightstone and Tracker also provided insight into the overall busiest petrol stations in SA.

The research involved analysing the 2.5 million trips that 450 000 vehicles take every day, across 37 million kilometres. Hefty.

Of course, this data is only reflective of Tracker customers, but Lightstone believes that the numbers are high enough to reflect the behaviour of the wider motoring population as well.

The data provided by Tracker helped Lightstone ascertain where drivers choose to fill up on petrol, which petrol stations they would rather avoid and how long they spend hanging around the service station in general.

Also read: How will the VAT increase affect your insurance

Petrol stations along main routes and national highways again proved to be the busiest – particularly in and around Gauteng. No surprise there.

This time, though, the period taken was between August and November of 2017. 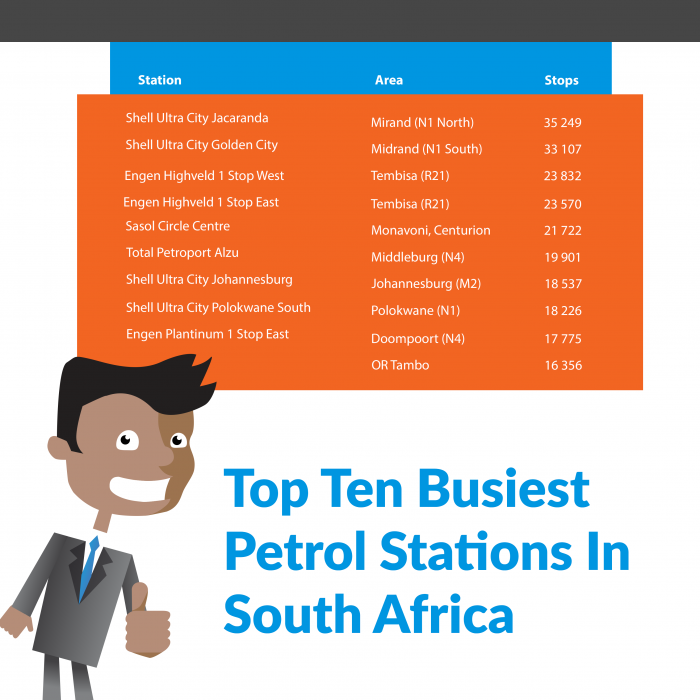 In the top twenty busiest petrol stations, Shell accounted for seven of the twenty. Engen came in at a close second with five, Total Garage four and Sasol and BP with two apiece.

It may be noteworthy that these figures reflect absolute numbers. They do not take the different Tracker penetrations in the country into account.