Fuel prices expected to jump to record highs in June

Fuel prices will jump to record highs in June on the back of stronger international oil prices, and a deficit carried over from April. This is according to the Automobile Association (AA), which was commenting on unaudited month-end fuel data released by the Central Energy Fund (CEF).

The Rand traded in a fairly narrow band against the US dollar throughout May. However, international oil prices have come under strong pressure, accounting for two-thirds of the price rise which will come into effect next Wednesday, 6 June,” the AA says.

The Association says this month’s price hike also includes a large deficit carried over from April.

“The Department of Energy’s monthly close-out happened early due to the public holidays in April, after which the Rand lost almost 60 cents against the US dollar in a matter of a day. This meant a substantial fuel price rice was a near certainty from the start of May,” the AA explains.

Petrol is expected to rise by up to 85 cents a litre, diesel by 87 cents, and illuminating paraffin by 82 cents.

Of particular concern is the expected increase to the price of paraffin. The AA says this increase comes following several fuel hikes and increases to other commodities and services the past few months which have hit the poorest the hardest. It also notes this increase comes at a time when many people will rely on paraffin for heating in the winter months.

“There appears to be some possibility of a lower oil prices in the medium term with OPEC countries discussing a production increase. However, this will rely on a stable Rand for fuel users to feel the benefit, which is not certain at this stage. We advise fuel users to expect further hikes and continue to economise in all ways possible,” the AA concludes.

Illuminating paraffin wholesale price history: 2015 – 2018. This indicates the jump in the price of paraffin from R8.37 a litre in January 2018 to the expected R9.27 in June. The AA says these increases hit the poorest the hardest, and come at a time when already cash-strapped consumers are paying more across the board for a range of commodities and services. 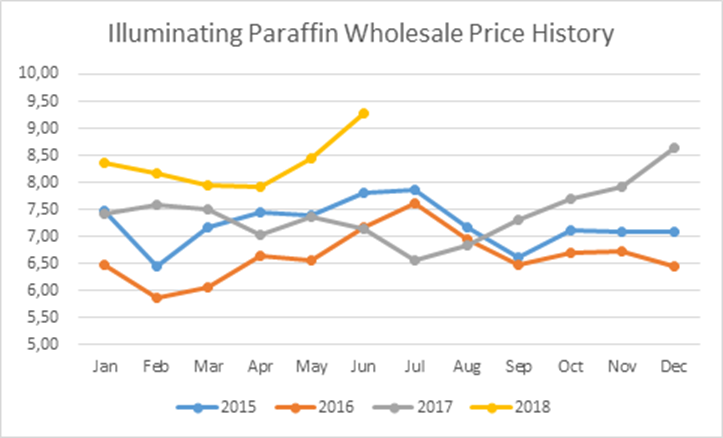