Lamborghini, the word alone is enough to elicit interest. After all, I have your attention because of it. Whether or not you love or are indifferent to cars, you know what this word means; and the connotations are the same for all of us. Sexy. Fast. Expensive. They’re the black opal of cars.

The first Lamborghini I drove was the Diablo. Granted it was on Need for Speed, with the worlds tiniest racing-wheel controller. I was 10, and I loved it. Back then it brought on the feels for everything that would lead to me becoming a motoring journalist. It was fast in the game, if you cornered just right you could get a little bit of slide action, and if you mistreated it or cornered too hard, it was upside down in the guardrails. It was unforgiving, and I loved it.

My first actual Lamborghini I drove was the Gallardo. I love the name and the way it rolls off your tongue. Guy-ardo. The ‘ll’ is pronounced as a ‘y’. It was the LP 550-4, which stands for Longitudinal Platform. 550 horsepower. 4-wheel drive. It was magnificent. It’s been the benchmark of perfection for the last eight years. It made me cry. The beautiful collaboration between mid-engine weight distribution, flawless steering and all-wheel-drive surety, I’d never driven anything that came together in a better package than the Gallardo.

That was the last Gallardo model to roll off the production line; its replacement is the Huracán. What the Gallardo and the Huracán Evo share in common is that they’re both the driver-friendly Lamborghinis. And it’s the one you can afford if you’re the ‘just made it’ millionaire. The Lamborghini Huracán Evo is a work of art in the flesh, the creases are in all the right places. The shape alludes to speed, the pointed nose perfectly crafted to cut through air as efficiently as possible. The style elements all have a ‘Y’ theme, taking cues from the legendary Countach in the ’80s. And can we just take a minute of silence to fully absorb the beauty of the high-mounted tailpipes below the new suspended spoiler.

The large air intakes at the front cools the massive carbon-ceramic brakes, 380 mm on the front, and 356 mm on the rear. With great speed, comes great braking responsibility. The creases and large vents are not for brake cooling alone, as we’re informed during the product briefing, it’s to do with aerodynamics. The Huracán Evo has seven times more downforce than before to make sure it stays on the black stuff at speed, you don’t want the twitches and wiggles setting in when you’re heading north of 200 km/h. Top speed you ask? 325 km. An F1 car rarely attains that speed in a race; let that settle in, and then think about the Huracán Evo again, it is a machine.

It’s snug behind the Alcantara-clad wheel, all 6”0’ of me fits in, sweaty palms of excited anticipation are kicking in and I haven’t even fired her up yet. Figuring not to be an idiot, making sure that all systems are set to maximum molly coddling, I set off. With 470 kW underfoot there’s a measure of respect that’s commanded from the Huracán Evo. There are other cars around with similar power outputs, though they’re a lot (A LOT) bigger and heavier, which makes their driving dynamics very different. The Huracán Evo has power-to-weight ratio of 1 kW to every 2. 22kg of weight. 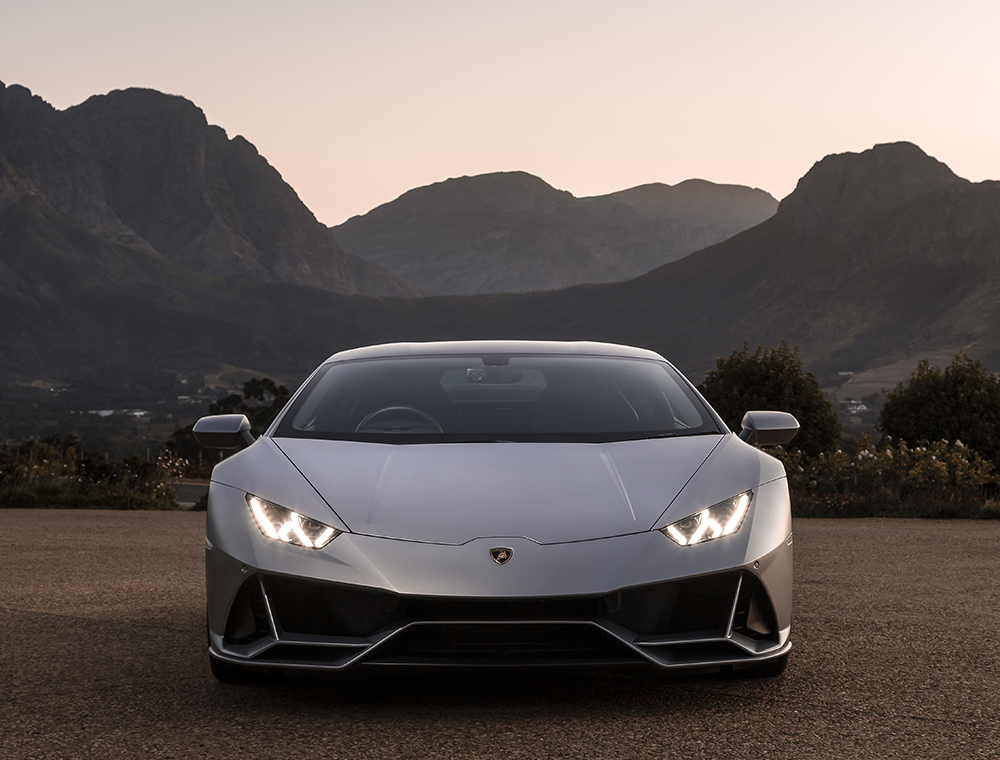 Power is produced from a 5.2-litre naturally aspirated V10 engine. Naturally aspirated, so there’s no lag, and a gradual metering-out of power – no complaints here. The engine note from a Lamborghini resonates with everyone, and I mean everyone. It strikes a deeper emotional chord for the driver. The engine is in the rear of the cabin, the howl of the V10 as it climbs the rev range, shifts gears, it’s loud, it’s breath taking. Though not discomforting, there’s very little between you and the engine, just some fireproofing, and that’s that. This is not augmented audio piped in through some sneakily placed speakers either. This is raw power; this is what a supercar sounds like and every other car wants to emulate. And I’m in lust.

The initial fear of ‘don’t do something stupid and bin it,’ wears off quickly. It’s feeling under palm is like manageable, everyday Lamborghini. The Huracán Evo has all the markers in its favour to suggest it’s going to be a handful to drive, but it’s not. It’s pleasant, the ride quality is not overly hard, and the throttle response is well tempered in default Strada mode. It looks (though doesn’t feel it in Strada mode) like it’ll get from 0 – 100 km/h in 2.9 seconds, the throttle response is oblivious to any impulsive inputs. Now I understand why popstars buy Lamborghinis, they look moneyed and it’s ‘easy’ to drive. The nose is not as low as imagined, though for practicality it’s fitted with a button that raises the front nose, and it’s duly used entering all stops along the route. I don’t want to be that girl that scrapes the underside of the Huracán Evo.

“The night is calling, I have to go” – Sport

Sport mode changes the nature of the beast, this is more the supercar that’s expected. The slide of the button on the bottom of the steering wheel takes the car from default mode to ‘so, you think you can drive?’ mode in milliseconds. Instantly the throttle response is sensitive underfoot, and the engine becomes a whole lot more sonorous. This is the time to use the 8.4-inch touchscreen, the human-machine interface, mounted on the central dash.

Locating the Lamborghini Dinamica Veicolo Integrata (LDVI) driving display gives insight to the mechanics of the driving experience. The LDVI management system controls torque vectoring, power distribution to wheels to keep grip optimal, and manages the all-wheel steering. Taking on a mountain pass the LDVI infographics relay which wheels are getting power on entry to a corner, and where it’s sending it on the exit. And you realise how very little you, as the driver, are actually doing besides turning the wheel and controlling the impulse of your right foot. The Huracán Evo is an all-wheel drive machine, with all the bells and whistles that help make a driver feel like a deity behind the wheel.

“The wolf is hungry, it runs the show” – Corsa

Another slide of the driving mode button and it’s in Corsa mode, aka race mode. The dash changes to show speed and the rev counter only. Corsa mode is best enjoyed with the gearbox accessed through shift paddles located behind the wheel. This is what we came for! The engine note changes yet again, it’s now a steady rattle and thrum, it seems like you can hear every port opening and closing, liquid entering and the ignition of fuel. The sound from the engine is electrifying, the downshifts howl – it’s alive! Power delivery changes from ‘would Madam like some more power’, to ‘in bocca al lupo!’ This is the belly of the beast. And from the belly of the beast you need to hit the red line. Watching the numbers on the speedometer climb, one thing is clear, you are simply a pilot, nothing less and maybe something more if you have the skills to push further and unlock the Huracán Evo’s true ability. However, I’m not wearing brown pants today, for when I start writing cheques my driving ability can’t cash. Feeling the micro readjustments to the car as it moves over imperfect tar, the crosswind that buffets, small and unobtrusive electrical inputs, the LDVI system is on full alert in Corsa mode, and I have respect for it. If I won millions (it starts at R5.5 million) this is the supercar I would buy. Keep the prancing stallion. What you want is a Lamborghini Huracán Evo. It’s a driver’s car, it’s got buckets of Italian passion, that has been tempered by German sensibility (Lambo is owned by the Volkswagen Audi Group). It’s fast and exotic, and has mad bits that make no sense, like the indicator switches on the steering wheel, though it has sensible shoes, too – the Lamborghini Dinamica Veicolo Integrata (LDVI) control unit. Is it up there with the Gallardo drive? It’s different, there’s so much more technological assistance at hand in the Huracán Evo that it’s far less stressful to drive. As someone who enjoys driving you have full access to what the Evo has on offer, there’s no fear in playing with the driving modes, there are all the safety nets. What more do you want in an everyday supercar?

*Disclaimer: all driving was done before lockdown in March 2020*