We have an influx of compact SUVs in South Africa, and they’re all very closely matched. They all feature small turbocharged engines and have all the technological bells and whistles thrown in. They’re not cheap either for cars with the words ‘compact’ attached that posit the assumption that smaller is cheaper. The ones that are cheap have an options list to make your eyes water. And the ones that are relatively cheap have a sub-par drive. With this experience in hand, my week scheduled with the new Suzuki Vitara 1.4 GLX wasn’t something to look forward to, and that alone should be the warning bell of pride before a fall – judging a car by its competitors’ flaws. 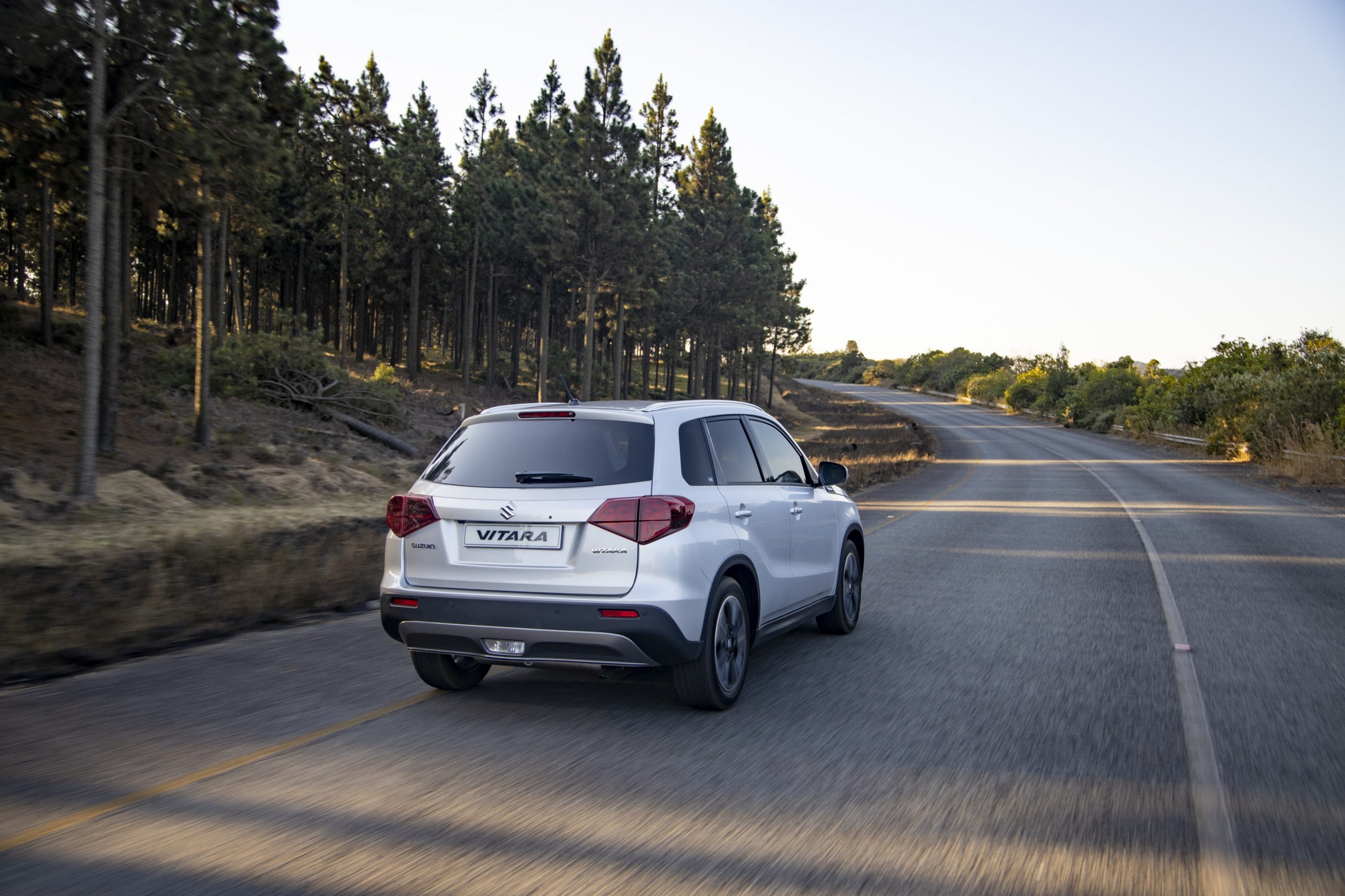 The first outing was a trip to the shops, pulling onto the main road the steering was alive, no glassy sections in the wheel where feedback went numb, the throttle response was instant and the 6-speed manual gearbox was solidly built. So surprising were the driving dynamics, a ‘litmus test’ call to a fellow motoring journalist happened to check the temperature of first impression. The return trip home was taken the long way around to include a mountain pass; just to be sure there was no hallucinating about the Vitara’s dynamic performance. And to keep the consumables from being damaged by energetic cornering, the boot has shopping hooks to hang your bags off. It handles like it’s on rails for a front-wheel drive, this could be attributed to the 17-inch wheels that it runs on, not too large to distort the steering feedback, not too small to make it feel top heavy.

Compact SUVs often claim the ‘practical’ title, though in reality it often doesn’t turn out that way. In terms of space, the Vitara has plenty even with 5 adult passengers in the car. The rear seats are 60:40 split-folding, a MiniMal surfboard fits in without much fuss. Boot space is a class standard of 375-litres expanding to 1 120-litre with all the seats folded down. 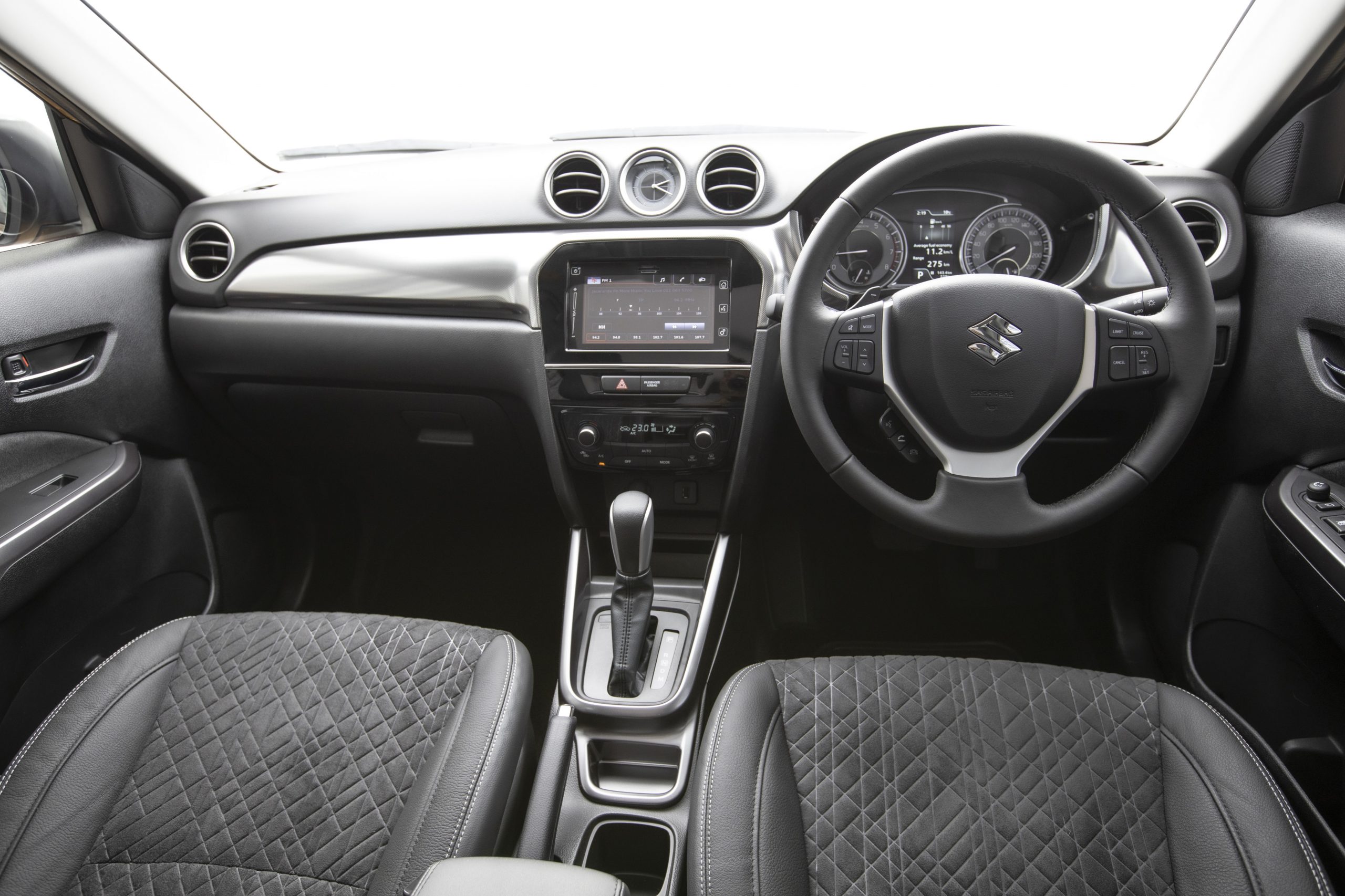 At R386 900 this is not the cheapest in the compact-SUV playing field though it does come fully loaded. Niceties for the Vitara 1.4 GLX include seats with suede detailing, a panoramic sunroof, roof rails that accentuate the SUV theme, auto headlights, tinted windows, touchscreen-infotainment system, park distance sensors with rear-view camera, steering-wheel controls for audio, Bluetooth and cruise control and push-to-start ignition button.  The usual connectivity apps are present, there’s Apple CarPlay, Android Auto and MirrorLink. If your connectivity is slightly less technical there’s an SD card slot, USB port, and 12V socket if you need it.

The same 1.4-litre four-cylinder turbocharged BoosterJet, returning 103 kW, is shared between the Vitara 1.4 GLX  and the Swift Sport. The Vitara gets 220 Nm while the Swift Sport has 10 Nm more. Both have 6-speed manual gearboxes that shift with short, sharp throws, it’s so much fun to shift that there’s want to constantly shift gears like you’re driving in a Fast & Furious movie. Part of the dynamic driving feel is due to the rigid TECT platform. The Total Effective Control Technology provides structural rigidity through impact-protection beams fitted in the shell, an active safety feature for the Vitara.

Claimed fuel consumption is 5, 8 l/100 though real-world testing returned 6, 0 l/100 km, which is purely the Vitara 1.4 GLX’s fault (not the driver’s), it’s such a great drive that going places in a fuel-efficient manner is not as much fun as lining up the corners. Compared to its competitors, the Vitara 1.4 GLX is in a league of its own in the compact-SUV segment.

Suzuki prides itself on safety, standard for the Vitara 1.4 GLX  are front, side and curtain airbags and and side-impact beams in the doors. There’s ABS with EBD and ESP systems and hill hold control (definitions here), the rear seats have ISOfix child seat anchorage points with the accompanying tethering hook.

The Vitara 1.4 GLX is so ridiculously good at offering an engaging drive that it left us speechless. Considering the price, the spec level and the ability to fulfill all the claims made, we’re utterly amazed that Suzuki is not making more of a fuss about the Vitara with this engine. This Vitara 1.4 GLX is built for those that want a very-good-at-its-job Suzuki and a car that makes the driver feel alive behind the wheel, it’s the unsung hero of the Suzuki Vitara line-up.