“My driver called me and advised that the truck’s battery was badly burnt.  I thought ‘no ways, how is that possible?’” says Barnabas Gwarisa from Probe South Africa. “He sent photos and I couldn’t understand how a battery could be that badly damaged to the extent that the battery casing and cables had all melted. In my anger of course I said, ‘You had better have been braaiing some good steak!’” 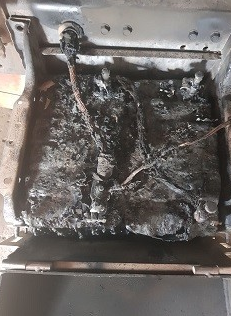 On a serious note, this is a problem and it is important for car owners to be aware that looking after the battery is a critical responsibility which falls to them. In this article Gwarisa points out a few things that can assist car owners to avoid similar occurrences, albeit not as disastrous as ‘braaiing the battery’…

Imagine a truck driver who has gone to collect a load at a mine, which is a significant distance away from everything.  At times like this, the driver may stop for a rest period and light a fire to enjoy beneath the beautiful South African sky before retiring for the night.  The question to consider is how close the fire may be to the truck battery. There is always a chance that the fire flames might just be close enough to transfer enough heat to cause the plastic casings and for the cables to melt. Seldom will your driver admit to having lit a fire and will always blame the battery.

Most trucks have their batteries exposed on the sides and are not covered. Truck drivers must avoid parking close to the veld where there is a fire risk. There should be some significant gravel around the truck to prevent flames from reaching parked vehicles and any workshop or warehouse in which batteries are stored should be fireproofed. This is general awareness either a truck owner or a retailer must keep in mind.

Sometimes in workshops, people forget when using grinding discs or cutting discs that the sparks from grinding metal may potentially land on the battery and ignite the polypropylene, which is very combustible and could cause a similar effect to the one depicted in the photo.

The customer must be aware that a battery in good condition normally breaks down water into hydrogen and oxygen gas but exists in equilibrium to allow a recombination reversible reaction to occur, forming water again. A faulty battery, however, is continuously releasing hydrogen gas and oxygen through the vents of the battery. If for any reason flames comes into contact with the hydrogen gas that is released, an explosion of the battery could potentially occur, and the customer can lose the battery completely.

Increased resistance in a battery which could be caused by low levels of acid coupled with increased concentration and viscosity of the electrolyte may also generate heat in a battery. It is imperative that for those batteries that are not maintenance free, the correct acid levels are checked and maintained, and the specific gravity of the electrolyte is in line with that of a normal-functioning and charged battery (refer to supplier specifications).

A very unfortunate incident would be that of an individual throwing a lit cigarette on the battery by mistake which could end up lighting the cables and the battery.

The secret to long battery life is that as a customer must educate themselves and their employees on how to prolong the life of vehicle batteries through taking proper care and caution. The bottom line is batteries that are burnt due to customer negligence will not be covered by the supplier warranty policy. So, remember, due care saves a dollar.